In 12 hours from now we'll be leaving our apartment here in Costa Rica for the next 19 days. We'll be boarding a plane to take us to Seattle, Washington. It's hard to believe this time has already arrived. It's even harder to believe that this will be our last visit to the States (potentially) for the next 2 years.

We just finished our last week of classes for the trimester. There are a lot of different emotions and thoughts that have been running through my head. For example: This time is going by so quickly. I can't believe we've already been here this long. What will next trimester end up looking like? Will I be equipped in spanish well enough after just one more trimester?

It's also a big shift as many singles, couples, and families have graduated and won't be around next trimester. We've also got 29 new families coming to begin at the language school starting in September. The campus will look quite a bit different. 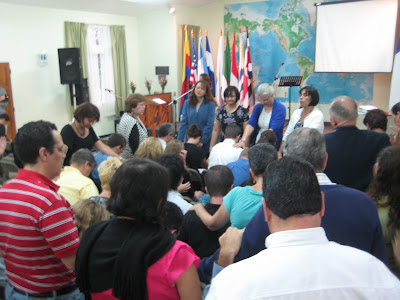 I asked one of the graduates after the ceremony on Friday how he felt about being done here and moving on to Peru. He said that it wasn't all that strange. It would be hard for him to say goodbye to some of the Costa Ricans he had befriended, attended church with, discipled, and shared life with. It was unlikely he would ever see them again. But he commented that as missionaries, we're always traveling. We may run into one another again. We may not. Either way, it simply felt to him like, 'it was time for all of us to get to work.' There's some sadness, some excitement, some apprehension-- but this is what we've all been called to, and now it's time to move on to the next step in the journey.

In terms of news about us, we've been amazed at how much Kaia has been developing over these past couple of weeks!  Last Monday we introduced her to food other than breast milk for the first time! She has now experienced Costa Rican bananas and avocados. She seems to prefer bananas. 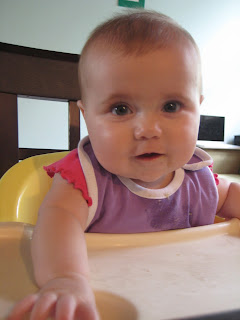 She also finally conquered the 'roll over from stomach to back' trick a little over a week ago. It seems most babies do that before having the ability to sit upright on their own... but she's doing things in the order she prefers! We're just excited to see her connecting the dots and developing new skills and more personality day by day!

To wrap things up, we're really looking forward to some R & R. We've brought spanish workbooks, notes, and a little homework with us, but we're excited to take a breather, be with family, and be renewed before launching into another trimester of spanish. God is good!

Thank you for your thoughts and prayers for us-- we treasure each and every one of you and are so grateful for your support of us!

May God bless your week!

Posted by jimandsuzyinecuador at 8:40 PM