This week I want to tell y'all about a good friend of ours. Paul Jones is a 36 year old from Ohio. Paul is single and is a pilot. He worked primarily regionally in the East Coast and a bit in the Midwest, but he has also made flights down to Texas and many other locations. He even fixed up a plane that he then flew solo in all the way up to Alaska.


When we arrived in the end of April, we had a very small group of incoming students. There were 10 of us total. Four of us were men, and the other 6 women. Jeremy McMillan and I are married and have children, and Tom and Paul were single. Tom was in his 60's and though Paul and he varied quite a bit in age, Paul kind of took Tom under his wing. As the two single men of our class, Paul helped Tom quite a bit in learning/understanding spanish, and they spent quite a bit of time together. I had a few good conversations with Paul last trimester, but as all new students, we spent a lot of time just adjusting to the culture, new language, and routine of daily life.

Tom left after one trimester, leaving Paul as the only single guy. Others left, too, leaving our '2nd trimester class' at a grand total of 8 people. Jeremy, the other married guy came in with a decent amount of spanish, so he was placed in a higher language class. So this trimester Paul and I are the only guys in grammar class together. Not to mention that three of the other women exclusively tutor... meaning there are 5 of us taking full-time classes.

At any rate, Paul and I have become very close. He's a dear friend, and a true joy to spend time with. He's also a guitarist and singer, so we've had multiple chances to play together and lead worship alongside one another. He's got a heart of gold, and we're excited for the ministry he's going to be doing in Guatemala.

Being that he's a pilot, his ministry has to do with flying. He's being sent by a ministry organization called Missionary Air Group (M.A.G.) and will basically be pioneering the ministry in Guatemala. I should mention that Paul worked stateside with a missions organization learning the nuts and bolts mechanics side of airplanes as well. So, not only can he fly the planes, but he's a mechanic and is completely capable of repairing and caring for planes of many varieties.

There aren't really any landing strips in Guatemala, and therefore there's not much going for this country in terms of smaller planes being able to transport people for ministry, emergencies, health care, delivery of much needed supplies, etc. So this is where Paul comes in. He will be traveling around  Guatemala, building relationships with villages, towns, and individuals to build trust and eventually build landing strips for airplanes. As he develops more and more locations for planes to land and take off, ministry throughout the country will be able to occur faster and when necessary.

So, please pray for Paul. He's going to be staying here for another trimester, meaning that he'll be here in Costa Rica through April, roughly. It has been such a blessing both for Suzy and I to have someone that we feel so comfortable with living just down the road. It's also been a huge blessing for me to have someone that I click with in such a strong way as a brother in Christ, but also just as a really strong friend. Whether we want to have brunch with someone, go for a hike, play games, go to a soccer game, or just talk for hours, Paul seems to always be there for me (and for us) and has really been a defining presence in our time here at language school.

I should also mention that Paul is an incredible photographer! At the school's harvest (halloween) celebration, Paul took pictures all throughout the night, and took this amazing one of our family at the end of the night. 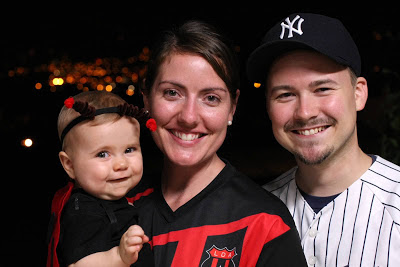 To follow more closely what Paul is all about and what he's up to, his blog is:
http://hishangar.blogspot.com

Wishing all of you a wonderful start to your week!

Posted by jimandsuzyinecuador at 6:50 PM