Oyacachi: Stuck in the Muck.

As the shouts of joy died down, I will never forget the sound of all of the little voices yelling, ‘Noooo!!!’ 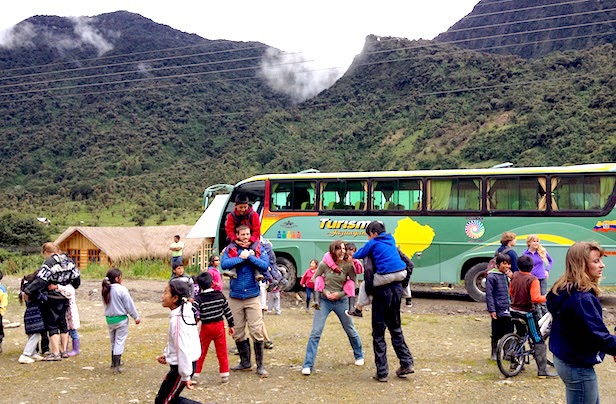 Thirty five of us pulled into Oyacachi on a bus just two days earlier, with about five of us having visited the town previously. The group I was with is from Camp-Of-The-Woods, a camp located in Speculator, NY. They have a discipleship program (called LIFT) for young adults who want to spend a semester or two to intentionally grow in their relationship with the Lord, be mentored and discipled, experience outdoor adventure and God’s creation, grow in their understanding and experience of missions, all the while serving at the camp. We have hosted this group at El Refugio every year for about the past five years. 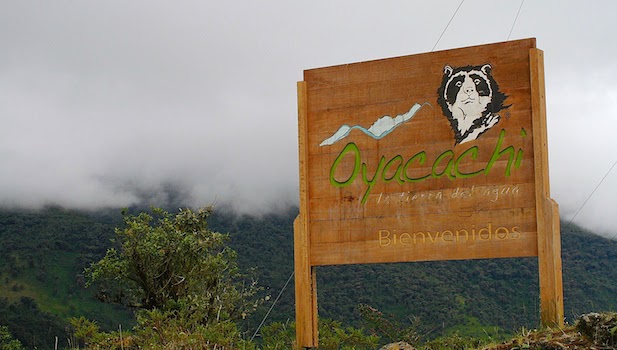 Part of their time here is always spent connecting with two of our ministry partnership sites: the towns of Chaco and Oyacachi. On the day mentioned at the start of this blog, we were less than an hour away from leaving Oyacachi to head back to El Refugio. What had happened was that during our three days in Oyacachi an excavator had come through and dug a trench between 5 - 6 feet deep between the road and the parking area where the bus had been sitting. The bus driver had finally gone to turn the bus around, after having sat in the spot for 3 days. When he went to pull out, the two front tires sank deeply into the loose dirt (that had turned to mud from all of the rain) where the trench had been dug. The nose of the bus sat squarely on the ground while the wheels were halfway submerged in mud. It appeared we might be staying a little longer than we had anticipated. 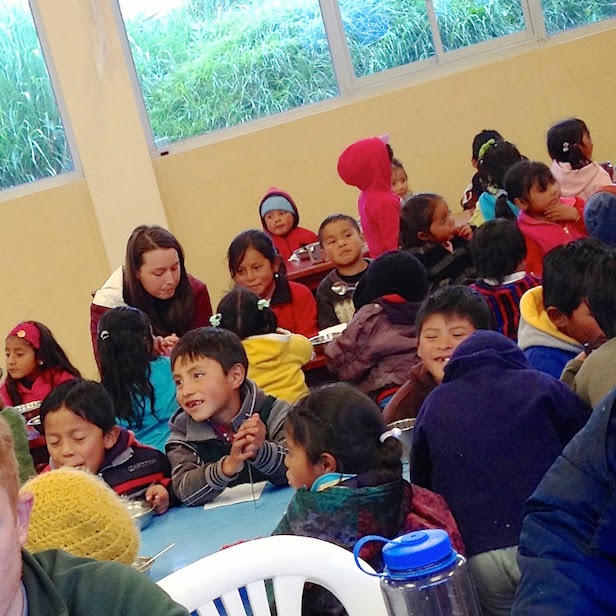 It was lunchtime when all of this happened, and our group had several tables end-to-end located right alongside two rows of other tables end-to-end. The difference was that our tables were normal height, while the other two rows were built for children— very low to the ground. Their tables were filled to the gills with little kids who are part of the Compassion program in Oyacachi. Ranging from three years old up to around ten or so, these were all children we had been playing with ever since we had arrived. The first night we held a service at the church where special music was shared as well as many testimonies. We began all together in the sanctuary, but split up halfway through the service with the second half catering more specifically to each group: young adults in one location and the adults remaining in the sanctuary.

The following two days were structured similarly as we had an hour at the public school each day to play games, share skits, and give simple english lessons, followed by partnering with the Compassion program hosted at the church. Students helped pass out the food to all of the kiddos, and the second day we were given time to teach the children. Following the meal the team put on a skit that connected to a Bible lesson and then all of the children made a craft alongside the team that related to the Bible story. Once the craft was done, everyone ran up to the community volleyball court for games that we had prepared, and many of the kids stuck around getting piggyback rides, laughing, and running around until we had to leave to eat dinner. We held another service the second night, and I practically had to beg a few of the young girls from the town to head home at the end of the night, as all of the team members were going to bed. 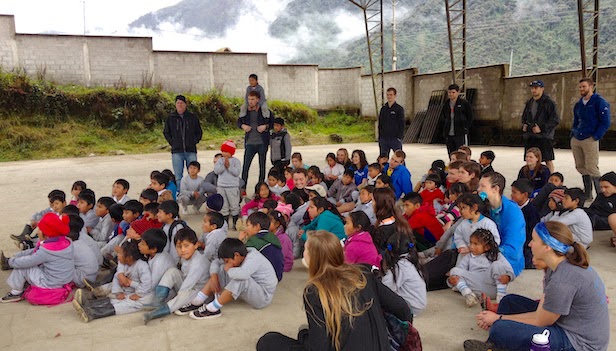 One thing I so appreciated about the LIFT team was their intentionality in deciding to make the gospel message central to all of the interactions and opportunities they had. Whether we were at the school, with the Compassion kids, or in an evening service, every chunk of time we spent with members of the community a clearly thought-through presentation of the gospel was plainly laid out. I should know, as I translated half of the testimonies, a sermon, and multiple drama presentations.

In the short spurts of 'free time' that we had, I visited with the Pastor of the church and other members of the congregation. I even had a chance to ask a few questions and videotape the Pastor and another member of the community on our final day. When I asked the Pastor about the benefits he saw of teams like ours coming to do the types of things we had done, he enthusiastically responded by saying how clear it was to see the impact. He mentioned that when groups like ours come in we have access to a much wider base of individuals in the community. He even went so far as to say that those on the fringes of society are willing to come out and interact with us, and they're often harder for the church to draw in. It was obvious how dearly the children loved being with us, and he ended by pointing out the fact that when people from a different walk of life and place in this world come to visit, it opens up opportunities simply because locals have an interest in finding out who these people are and what their experiences are like.

We did finally get the bus out of the mud. Though the excavator tried pulling it out with a metal cable, we watched it snap twice and finally Rick jumped into action. He called us all outside and half of the team got into the back end of the bus while the rest of us pushed as once again the excavator pulled using the metal cable. It heaved, heaved, and finally lurched forward out of the muck! We all went back inside to finish lunch, and just a minute or two later heard the bus get ready to drive fully across the trench. As it plunged forward, it cleared the muck fully without getting stuck and came to a halt on the other side of the trench. All of the LIFT students cheered! And as their cheers died down, there were just as many of the Compassion children yelling, 'NNoooooooo!!' knowing that this meant we were, in fact, leaving. And it struck me. 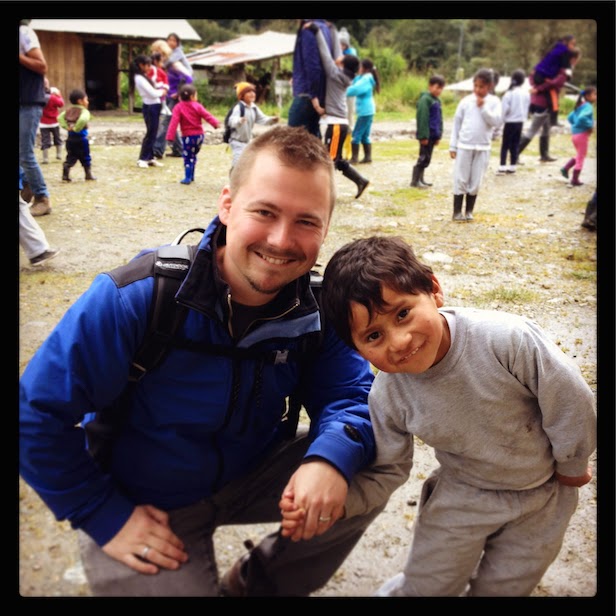 Although we weren't even there for three full days, a connection had been made. Those kids loved being with the team, and simply didn't want us to go. I have never in my life experienced such a long goodbye as I did that day. Kids running, spinning, gifts being given, hugs everywhere, pictures being taken-- and neither side could easily say goodbye. Guillermo had found me at every turn throughout those three days and I was happy to be able to at least give him our family's prayer card and truthfully tell him that we as a family would be back again to visit in the coming months. Even still, that didn't make it easier.

As I reflect on those days today, a verse from John comes to my mind. In John 13:35 it says, "By this everyone will know that you are my disciples, if you love one another.” There was no shortage of love during those days in Oyacachi. And it wasn't simply all action/service-- there was a healthy helping of truth given with it. And as the team stopped at an overlook on the way out of town to look back, pray over the town, and sing a blessing upon it, I was reminded of what a beautiful picture it is to be in the family of God, carrying each others' burdens, lifting one another up in prayer, and being willing to give all of yourself through love in the name of Christ. Needless to say, it was a wonderful three days. 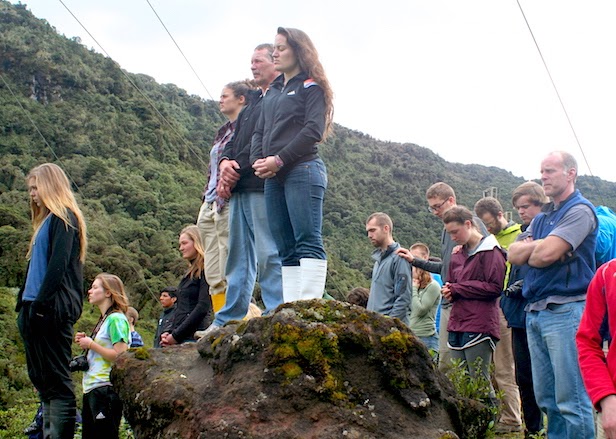 Posted by jimandsuzyinecuador at 5:55 PM